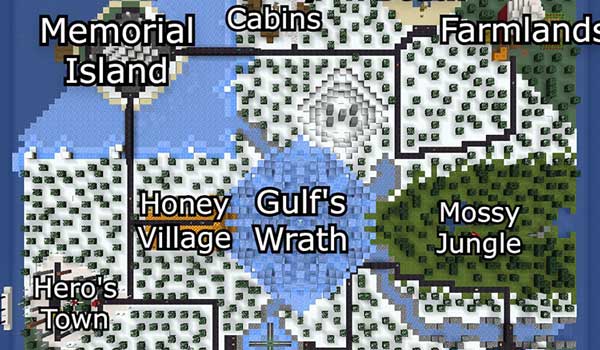 A Battle Royale map for Minecraft? That’s right. And inspired, of course, by Fornite.

Block Royale 1.19, 1.18, 1.17 and 1.16 is a map that has been inspired by Fornite’s Battle Royale game mode to build a world of limited dimensions, where players will be able to collect resources and prepare to face other players.

It is a map that is intended to be played by multiple players in multiplayer mode. The idea behind the map is very similar to Fornite, and to that of the vast majority of Battle Royale, survive, get resources and defeat the other players.

The map, as we can see in the images, consists of several areas. These are some of them, Zero Laboratory, Hero’s Town, Mossy Jungle, Farmlands, Snowy Cabins, Honey Village, Sandy Beach, Souless Chilli Mountain, Memorial Island and Gulf’s Wrath.

How to install Block Royale Map for Minecraft?