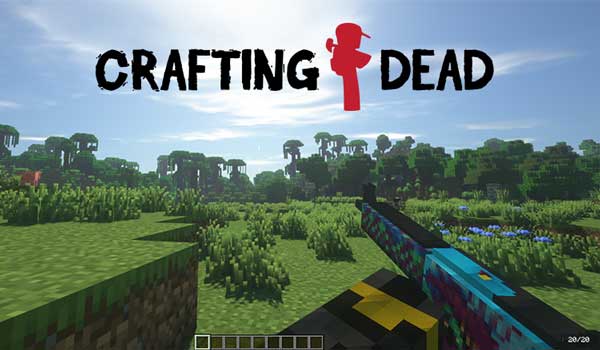 Everything you need for firearms and melee combat.

Crafting Dead 1.18.1, 1.16.5 and 1.15.2 is a mod that will allow you to craft a large number of items designed for melee and ranged combat. The content added by this mod can be classified into three main categories, clothing, combat and medicine.

As for weapons, we will be able to make many firearms, including pistols, rifles, machine guns, shotguns, tasers and rifles based on real models. These weapons will work with magazines, can be colored and we will be able to install upgrades such as sights, silencers, laser pointers, and so on.

Beyond firearms, the mod will also allow us to make melee weapons. For example, we will be able to make katanas, knives, shears, bats, machetes and electric saws, among others. We will also be able to make several types of explosives, remote detonators, parachutes and binoculars.

In the clothing section we will find several models of bulletproof vests, helmets and decorative hats, masks and suits or full armor. As for medicine we will find items such as syringes, bandages and first aid kits.

If you are one of those who have been enjoying downloadable content for Minecraft for years, you may know this mod by another name, since we are talking about the continuation of the Ferullo’s Guns Mod. A very popular mod at the time.

How to install Crafting Dead Mod for Minecraft?