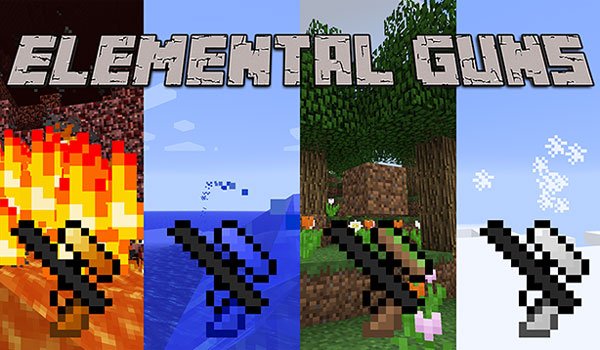 Improve distace attacks of your character, with these four new elemental weapons.

Elemental Guns 1.7.2 is a mod that lets you create up to four new weapons, allowing you to shoot various elements like fire, water, air and dirt. Each gun includes a charger where the element you want to shoot is placed and a screen will show you how long will the charge last.

Let’s see what does offer heach one of these new weapons. Starting for the gun fire, its behaviour like a flamethrower. The water gun spears water particles. Air gun lift or throw the enemies in the air, but it doesn’t cause damage. And in the las place we have, the dirt gun, which allous to shoot dirt blocks and seeds.

How to install Elemental Guns Mod for Minecraft?