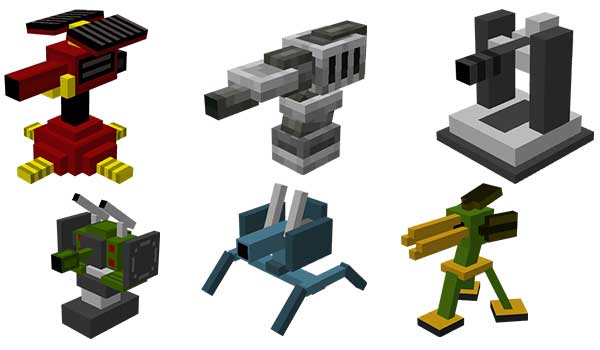 K-Turrets 1.19.2, 1.18.2 and 1.16.5 is a mod that will allow us to manufacture several models of defensive turrets to protect areas from enemies and combat drones with which we can attack our enemies from the air. The objects of both elements are all hostile creatures of Minecraft.

The process to manufacture the turrets and drones is to start by getting a new mineral resource, steel. To get a steel ingot we will first have to make “semi-finished steel ingot”, processing three units of coal and an iron ingot in a blast furnace.

At this moment the mod will allow us to manufacture the following turret models. Bullet turret. Arrow turret. Brick turret. Fire charge turret. Gauss turret. Cobble turret. The same variants will be found for the drones, which will follow their owner from the air.

How to install K-Turrets Mod for Minecraft?