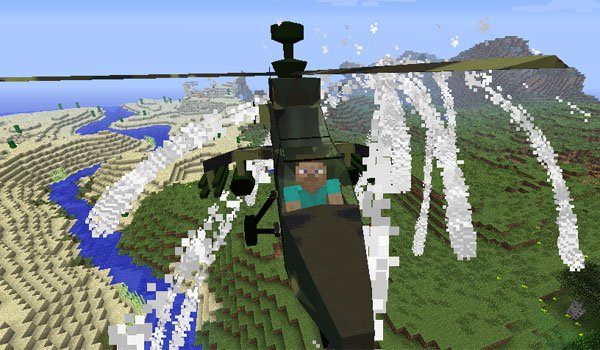 Helicopters and aircraft fighters jets to stop your enemies from the sky.

MC Helicopter 1.10 is a mod that adds various models of helicopters based on currently real ones, plus two Harrier aircraft fighters, one is British and the other version is the American one.

Obviously both helicopters and aircraft fighters, carry weapons. In some cases they have installed machine guns, rocket launchers and and both of them for certain types.

In addition to these aircraft, the mod adds Stinger rocket launcher, parachute and a laser target , which upon activation, sends three fighters attack or fighter aircraft on that goal we have designated.

The mod also allows us to create containers that have the same function as a chest, but it can be transported using chains and by hooking the helicopter.

How to install MC Helicopter Mod for Minecraft?