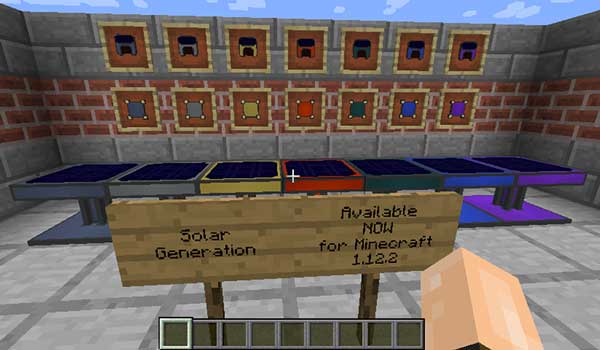 Generation and storage of energy, Forge Energy, by means of solar panels.

Solar Generation 1.16.5, 1.15.2 and 1.12.2 is a mod that will allow us to manufacture solar panels, with which we will be able to generate energy, Forge Energy, from the sun’s rays. In total we will be able to manufacture seven variants of solar panel. The main differences between all of them is the power generation capacity, as well as the storage capacity of the energy produced.

These solar panel variants are, in order of highest to lowest energy production and storage, Ultimate, Advanced, Resonant, Signalum, Redstone, Hardened and Leadstone. This in terms of static power generation systems, since the mod will also allow us to manufacture a helmet for the character, with a built-in solar panel, which will allow us to generate and dispose of energy on the fly.

How to install Solar Generation Mod for Minecraft?