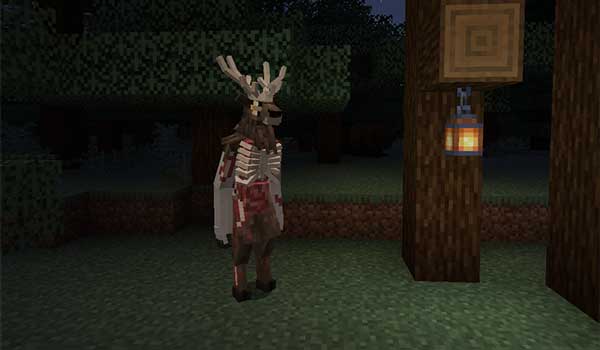 A new weapon and a new way to get food.

Wendigoism 1.16.5 is a mod that focuses on offering us a new way to get food in Minecraft, though perhaps a little different from what you might imagine. The mod adds a new weapon to the game, a knife. Unlike swords, the knife will cause much less damage, but will be much faster. Plus, with each attack we’ll get a piece of meat. If the enemy is on fire, we’ll get cooked meat.

Consuming a large amount of meat with this method can have its advantages and disadvantages, such as giving us permanent potion effects and not being able to use some of the pieces that make up the armor. One of the disadvantages is that if we eat a lot of meat it can generate the legendary Wendigo, which we can see in the image above of this article.

Another option offered by this mod is that, in an emergency situation, we can use the knife against our own character, getting meat, although it will also produce damage. This mod is based on an outdated mod called Cannibalism.

How to install Wendigoism Mod for Minecraft?

Download Minecraft Forge
Download Wendigoism Mod
Double click on the downloaded Forge file to run the installer.
Paste the downloaded mod file into the .minecraft/mods folder
We’ve got it installed and ready to go!